Editor’s Note: This story is part of a campaign called Biodiversity by the Bay, run by Mumbai’s Ministry of Magic. The campaign is a citizen-driven environmental initiative to protect the rich biodiversity that lives in, or makes a stop in Mumbai on its migratory path elsewhere. The story is the third in a series – An architecture student’s vision for building a greener Mumbai – in which young architecture and urban planning students pen down their ideas for a sustainable future for development in Mumbai.

Mumbai is a city with over 22 million residents, a 270 km coastline of the Arabian Sea and an additional 200 sq km under the coastal regulation zone. For these reasons and more, the city is undoubtedly exposed to the vulnerabilities of sea-level rise due to climate change. This vulnerability is exaggerated by the ever-increasing demand for land, for use in housing, commerce and industry. This has impacted natural and ecologically-sensitive areas in the city, depleting their existence in recent decades.

Overexploitation of these coastal lands by spilling industrial effluents in the creek, dumping garbage and construction debris in ecologically sensitive areas and land grabbing by destroying mangroves, has left the city’s ecological weapons against climatic hazards [mangroves and wetlands] under threat. More rainfall and flooding in the city is also causing the existing infrastructure – often built with little to no ecological sensitivity – to crumble. The situation is gradually making more and more people vulnerable to devastating impacts of climate change and natural disasters. Since the city’s inception, negotiations have been held time and again between competing interests in ecology and land development. Higher-level decision makers or policymakers and the coastal communities and slums are at the receiving end. This leads to continuous conflicts between the urban built environment and urban ecological environments where ecology has been losing the battle. With such immense pressure on the ecological environments and biodiversity, climate change is also pacing towards these cities at a faster rate. By 2100, the sea level is expected to rise by 1 metres all over the world.

This study echoes the need for cities to become adaptable to climate change and maintain the threatened ecological balance of the city with land development, built environment. This, while also addressing the vulnerabilities of the communities that live and work in these threatened areas.

Loss of land and infrastructure, vulnerability of communities to these drastic environmental changes, lack of financial resources in many communities to recover from such disasters, loss of biodiversity or their uneven distribution, are dealbreakers for . To understand this, the negotiations between the land and ecology and furthermore estimated its future with the climate change and effects on rising sea level in the region. For which, this article undertook the example of Thane Creek and the development of the planned city of Navi Mumbai. This included studying all the factors involved in its development from 1973 when the first development plan of the city was published up to today.

The article highlights how land development for Navi Mumbai required reclamation, where a node like Vashi, required more than 50% of its area reclaimed. It undertook widening of existing estuaries and using them as storm water drain connected from the Parshik Hill to the holding ponds. This helped absorb excess water towards the creek edge to avoid flooding. While this method of reclamation was chosen to prevent flooding like in the case of Mumbai but today, the city of Navi Mumbai floods every year. Despite the holding ponds being situated at a higher level to avoid creek water to enter, the age-old capacities of drains (60mm per hour) and holding pond capacity of 8 hours are unable to prevent flooding. Moreover, there is a decline in mangrove cover of the coastal area due to industrial effluents from the Thane-Belapur belt, and the city is now sensing the after effects of urbanization. While the city was designed for the ‘100-year flood’ which meant that there is only 1% chance of flooding to happen in a year, but with climate change and sea-level rise the idea of ‘100-year flood’ is far left off.

My Vision for Mumbai’s Green Recovery:

In order to overcome this, a planning approach of land and water integration is required where land use zoning and flood plain zoning along with water resource management will help reduce the damage. Likewise, treating flood water and rising sea level as a part of the water cycle of storm water drain and wastewater systems, by designing lands and spaces which are ‘meant to fail’ or ‘safe to fail’ will prevent any life and monetary losses during heavy rains. 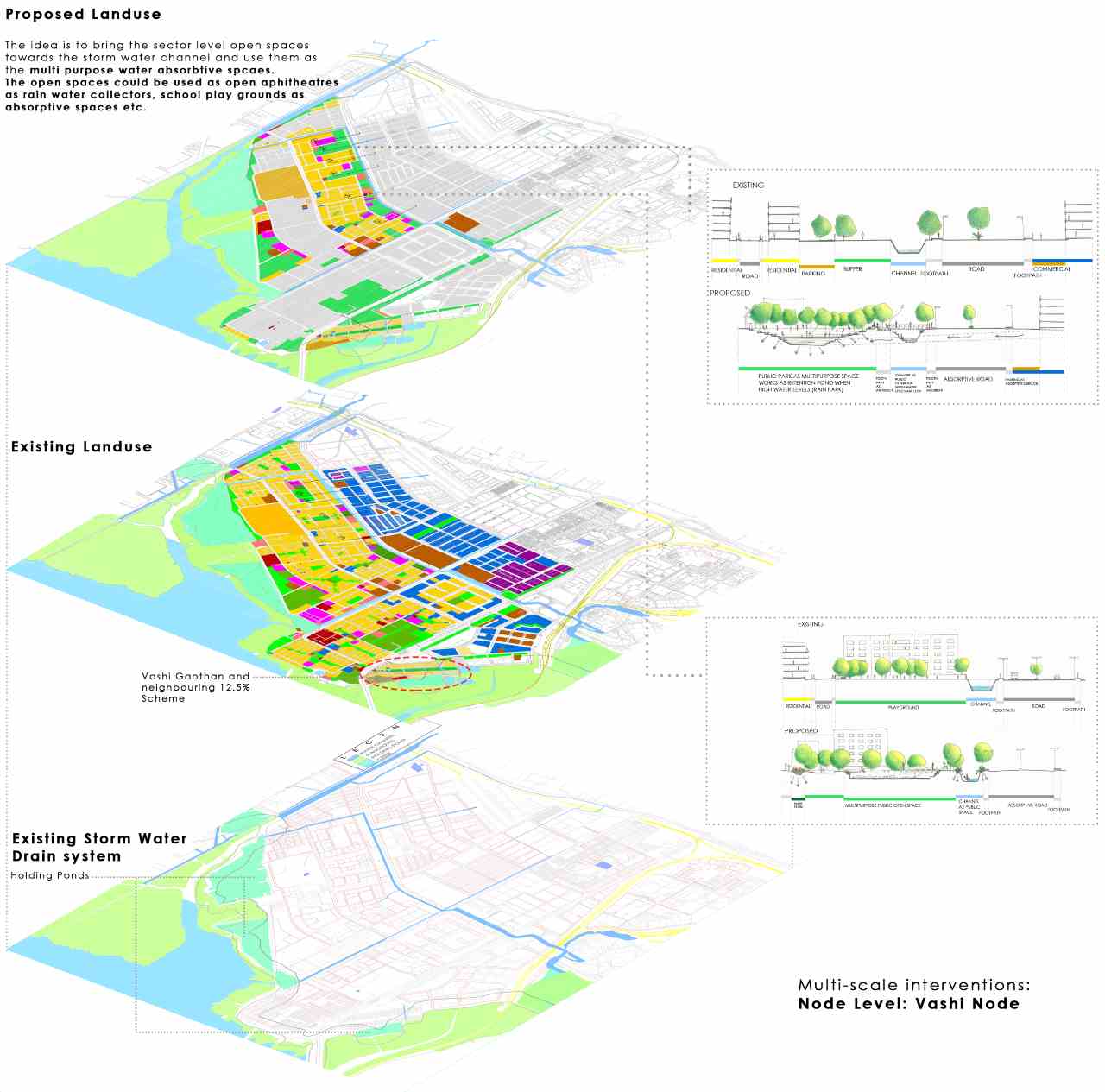 All these should be integrated at multiple scales in the city using public spaces, open spaces, swales, stormwater and drainage systems as flood adaptive spaces that work with natural systems for development of resilient water based-urban systems. Also, instead of using rigid methods like floodwalls and levees to protect the coast from damage we need to use ecologically adaptive ways. Therefore, this article reiterates on using water as a re-integrative, permeable member of the urban form. While also considering design of movement through space-time via circulation, dynamism and flexibility, along with combinations of work, leisure and commerce activities, ultimately supporting the communities. IPL on Pod: DC and RCB’s struggles, playoff scenarios, how the remaining league matches will go and more

IPL on Pod: DC and RCB’s struggles, playoff scenarios, how the remaining league matches will go and more

IPL on Pod: DC and RCB's struggles, playoff scenarios, how the remaining league matches will go and more Royal Challengers...