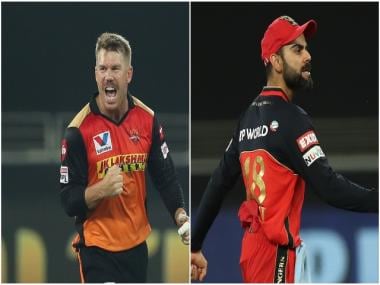 IPL 2020 LIVE SCORE, Royal Challengers Bangalore vs Mumbai Indians latest updates: De Villiers punishes another short delivery from a spinner, this time smashing one from Nadeem over long on for a maximum. The South African doesn’t last long beyond that hit however, as he perishes after hitting one shot too many, holing out to Abhishek Sharma at deep extra cover off the last ball.

RCB are second in the league table with 14 points from 12 matches while SRH are at the sixth spot with 10 points from same number of matches.

A playoff spot is at stake for RCB in the match. The equation is pretty simple for them, win the match and qualify for the playoff. However, for that to happen, RCB would need to beat their current losing streak which is now two-game long.

Virat Kohli and Co have lost their last two matches against CSK and MI. And while the clash against SRH is not a do-or-die situation for RCB, with one more game in hand, a defeat would adversely impact their net run rate.

SRH, on the other hand, would be determined to put up a tough challenge. The Hyderabad franchise could reach 14 points with a win against RCB and MI in their last match. And could qualify for the playoff if RCB, DC, or KXIP don’t reach 16 points and SRH possess a better net run rate than competitors.

SRH would once again rely on inspirational captain David Warner for his leadership and runs in the battle against RCB. Rashid Khan remains the franchise’s top bowler with Sandeep Sharma and T Natarajan providing able assistance.

For RCB the main concern is the fitness of pacer Navdeep Saini who missed the match against MI after suffering a split webbing in his right hand against CSK. His replacement Dale Steyn proved to be expensive against MI as RCB lost by five wickets. The franchise would also hope for runs from Shivam Dube and Gurkeerat Singh just in case Virat Kohli and AB de Villiers have another quite outing.