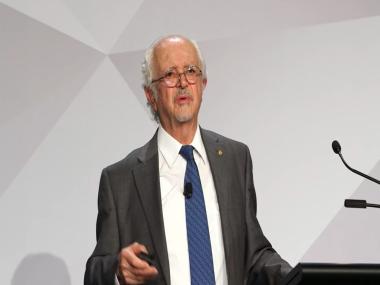 Mario Molina, who shared a Nobel Prize for work showing the damage that chemicals used in hair spray and refrigerators wreak on the ozone layer, which led to one of the most successful international efforts to combat environmental risk, died Oct. 7 at his home in Mexico City. He was 77.

The cause was a heart attack, said Lorena Gonzalez Villarreal, a spokeswoman for the Mario Molina Center for Strategic Studies on Energy and the Environment, the environmental research and policy center he founded in Mexico City in 2004.

Molina, a United States citizen born in Mexico, was a “trailblazing pioneer of the climate movement,” former Vice President Al Gore said by email, adding that Molina’s efforts “to understand and communicate the threat to the ozone layer changed the course of history.”

Molina and F. Sherwood Rowland of the University of California, Irvine, found that chemicals known as chlorofluorocarbons, or CFCs, would deplete the ozone layer in the upper atmosphere. Their discovery reshaped global environmental policy.

The implications of their findings were dire: Without the protective ozone, an increase in ultraviolet radiation would put the health of many species, including humans, at risk. The two scientists pushed for a ban on CFCs, beginning for both of them a lifetime of science-based environmental advocacy through congressional testimony and interviews.

Their work was attacked by industry; the president of one company said that the criticism of his products was “orchestrated by the Ministry of Disinformation of the KGB.”

Their work led to the 1987 Montreal Protocol, a landmark international environmental treaty to phase out the production of the compounds. That treaty had a unanticipated beneficial effect: It would later turn out that many of the ozone-destroying gases are also potent greenhouse gases. Without the treaty, climate change would have progressed even more rapidly than it has.

In 1995, the two men shared the Nobel Prize with Paul J. Crutzen of the Max Planck Institute in Germany. The Royal Swedish Academy of Sciences said in its announcement of the award that “the three researchers have contributed to our salvation from a global environmental problem that could have catastrophic consequences.”

In congressional testimony in 2010, Molina said that those who attack climate science focus on the areas of uncertainty as if it were a house of cards, which collapses if one card is removed. He compared it instead to a jigsaw puzzle, which reveals its image even before all the pieces are in place. With global warming, he said, “there is little doubt that the overall image is clear — namely, that climate change is a serious threat that needs to be urgently addressed.”

José Mario Molina-Pasquel y Henríquez was born March 19, 1943, in Mexico City to Roberto Molina Pasquel and Leonor Henríquez Molina. His father was a lawyer and judge who served as Mexican ambassador to Ethiopia, the Philippines and Australia. His mother was a homemaker.

He was fascinated by science from his youngest days, as he wrote in a memoir that appears on the Nobel site: “I still remember my excitement when I first glanced at paramecia and amoebae through a rather primitive toy microscope.” He converted a little-used bathroom in his home into a laboratory for his chemistry sets, guided by an aunt, Esther Molina, who was a chemist.

His family, following their tradition, sent him abroad for his education, and at 11 he was in a boarding school in Switzerland, “on the assumption that German was an important language for a prospective chemist to learn.”

He decided that of his two passions, chemistry and the violin, science was what he would devote himself to, and in 1960 he enrolled in the chemical engineering program at the National Autonomous University of Mexico. After studying in Paris and Germany, he began graduate studies at the University of California, Berkeley, in 1968. He received his doctorate in physical chemistry there in 1972.

The experience of studying at Berkeley was not just important to his development as a scientist, he would recall; he arrived in the wake of the free-speech movement, and political awareness was part of everyday life. He initially worked in the young field of chemical lasers, but he found himself “dismayed” to find that some researchers at other institutions were developing high-powered lasers to use as weapons.

“That was important,” Felipe José Molina, Molina’s son and an assistant professor of medicine at Harvard Medical School, said in an interview. Thanks to Molina’s experiences at Berkeley, his son said, he felt driven to do work “that had a benefit to society, rather than just pure research, or things that could potentially be harmful.”

1n 1973, Molina joined Rowland’s laboratory group at the University of California, Irvine, where they developed their theory of ozone depletion.

Rowland and Molina realized that, as the CFCs reached the upper atmosphere, where they could be destroyed by solar radiation, the chlorine atoms produced in the process would destroy ozone. “We were alarmed,” Molina recalled. They published their findings in the journal Nature in 1974.

He would later work at the Jet Propulsion Laboratory in Pasadena, California; the University of California, San Diego; and the Massachusetts Institute of Technology. At the Molina Center in Mexico City, he focused on alleviating that city’s choking pollution.

In 2013, President Barack Obama awarded him the Presidential Medal of Freedom.

While at Berkeley, Molina met a fellow chemist, Luisa Tan. They married in 1973 and divorced in 2005. She currently heads the independent Molina Center for Strategic Studies in Energy and the Environment in San Diego.

In 2006, Molina married Guadalupe Álvarez. She and his son survive him, as do three stepsons, Joshua, Allan and Asher Ginsburg; four of his six siblings, Roberto, Martha, Luis and Lucero Molina, and two grandchildren.

Rowland died in 2012. In his New York Times obituary, Molina was quoted as saying that the two scientists had not been sure they would succeed in their efforts to ban CFCs, “but we started something that was a very important precedent: People can make decisions and solve global problems.”

Gore, who shared a Nobel Prize in 2007 for his own work to warn the world about climate change, said Molina “never backed down from political pressure, always speaking truth to power, grounded in science and reason.”

“The world,” he added, “is a better place because of Mario.”

Karnataka Police Files FIR Against Kangana Ranaut For Tweeting on Protests Against Farmers Bills The Tumkuru district police on Tuesday...