I remember the first time I drove a Mahindra Thar. It wasn’t really a review, rather a fluffy feature for Overdrive magazine. The vehicle was the subject, but really mostly a backdrop for a model. It required the briefest of commutes with a small section of rocks and gravel. The terrain was a non-issue, but the horror of the interior was something I was not used to. Up until recently, every Thar I have been in – including the one in question – has been some sort of custom ‘project’. A different dash, different seats, a roof and metal bits that look fabricated at the same place that makes your window grills.

The 2020 Thar is shockingly different. It’s a car. Like other recent Mahindras. Few would not find the 2020 Mahindra Thar attractive

To my mind, the Mahindra Thar occupies the same sort of mindspace as the Royal Enfield Bullet. Traditional, long-standing (though the Thar model is relatively recent), butch, purposeful, signalling a non-traditional, earthy sort of driver. I imagine Milind Gunaji pre-ordered the new one six years in advance. And while accoutrements were not the strong suit of the Thar, when you got down and dirty, it pulled through. It’s a proper 4×4 with a mechanical transfer case, short wheelbase, adequate diesel motor and a variety of body styles, depending on what project suits your fancy.

The basic formula remains the same with the 2020 model, but with many changes that bring it up in line with more recent Mahindra vehicles. The body style and design unabashedly pays homage to the Jeep Wrangler, a very good-looking vehicle. We tested the factory hard-top model, but other body styles including a convertible are available. This means that we had modern conveniences like air conditioning and audio that actually worked as one would expect. Of course, it still retains the rough-and-ready project vehicle vibe, should you choose to go that way. Even our hard-top model had a proper roll cage inside, and we understand that the hard top can be removed without much bother. It will kill your waterproofing though. The Thar is a car!

If you’re an old-timer and remember Mahindras of old, you will be surprised by what they’re putting out these days. Refined, quiet diesel motors, top-shelf petrols, good interiors and value. The new Thar certainly surprised me from the first time I saw it at the reveal. It looks fresh, modern (if derivative) and solid. Like it’s properly put-together with purpose, as opposed to bolted in place depending on where the hinges would fit. Swing the door open (we drove a 2-door) and the surprises continue.

The interior is all-black and all plastic, but they feel high quality and nice to touch. No more of that cheap grey stuff that seems to start oxidising before it leaves the factory. Everything looked polished (it may have been) and felt solid. Despite the masses of plastic on the inside, nothing squeaks, shakes or rattles on the go. The model we tested came with a touchscreen infotainment system similar to what we’ve seen in other recent Mahindras like the Marazzo. It is adequate and gets the job done. It is also canted slightly up for legibility instead of (inexplicably) perpendicular to the floor, or what feels like toward the floor in some Scorpios of old. I was able to pair my phone via Bluetooth and had music at my fingertips thanks to the steering-mounted controls.

All the controls are where you’d expect, save for the extra lever north-west of the gear shifter to shift into 4H or 4L four-wheel drive modes. Ergonomically too, the new Thar felt comfortable, familiar and – for lack of other cliches – very car-like to operate. 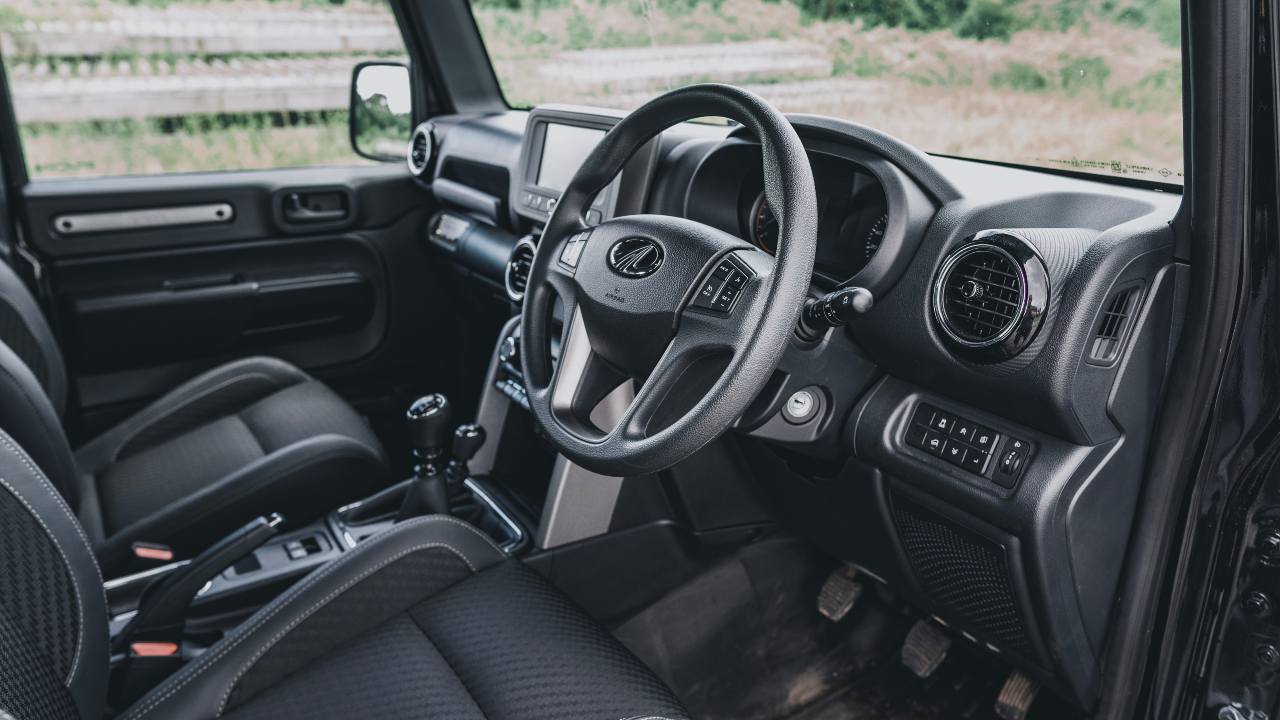 Lots of plastic, but it looks and feels alright

On the go: all the choice you need

Mahindra has made the new Thar available in 12 distinct options across two variant lines: AX and LX. There are a couple of options in the mix (apart from the option packs) that notch up another variant or two. Basically, you can have your pick: soft convertible top, hard top, 4 seats, 6 seats, 6-speed manual or automatic transmission, petrol or diesel motor. We sampled the top-spec diesel hard-top manual for this quick drive.

The mHawk 130 2.0-litre diesel motor in this Thar is a gem, like many recent Mahindras. Continuing to surprise, the Thar was a surprisingly quiet vehicle on the go. Given it’s short sub-4m stance and shorter wheelbase, there isn’t much space between the driver and the motor. Still, it maintained a comfortable cabin and one could hold a conversation while driving. The motor is also quite smooth and has plenty of poke for the city environment we had just enough time for. The diesel makes 130PS/320Nm, which is plenty for a stubby mountain goat such as this. It’s also enough that you don’t need to finesse the Thar into a particular zone of momentum to get the job done. You push the throttle and things happen. We didn’t take it much beyond 100kmph, and I was wary of the short wheelbase making handling jittery. It doesn’t, and I’m told the Thar is rock-steady at deeply illegal speeds. 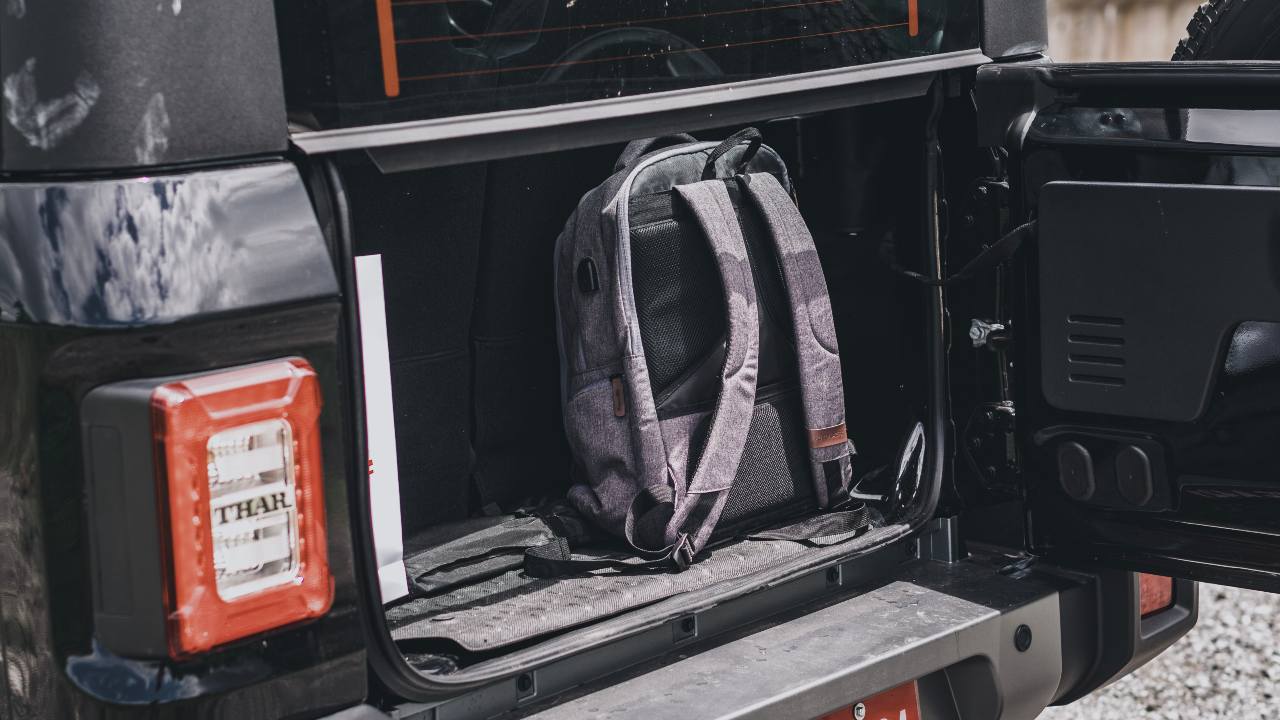 Cargo space is not a strong suit for the Thar. That sliver of space is all you get with the 4-seater

Steering is light and feels, well, like a car would. The angle seems correct, the torque required to make a U-turn is minimal. I really enjoyed weaving through traffic with the Thar. The flat sides and wide mirrors make placing it very easy. Suspension for road use was also good; I’d venture to say even with a bit extra damping, but comfortable nonetheless. Some Mumbai side-roads are currently pitch-black at night and riddled with fatal potholes, thanks to lockdown negligence. Nevertheless, the Thar did not have to slow down for any of them. The Thar has always been a capable off-roader, and we expect this one to be no different. We’ll have a go in one at Mahindra’s Igatpuri training centre soon. You know… for science. I drive fancy cars more than occasionally. At some point, it becomes routine, and with the wide availability of luxury and exotic vehicles in India, it’s not so much of a sight any more. Not so with the Thar. While we drove it, it was not publicly available and I can honestly say, it attracted more stares and questions than some swoopy sports cars I’ve had the good fortune to drive. The connect that the general public has with Jeeps and Mahindras (synonymous in India, much to FCAs chagrin) is enviable. Patriotic, even. One wants the Mahindra Thar to be a nice, aspirational, achievable vehicle. And now, it is, for a much larger swathe of the population.

Thanks to the refinement, modern motors and engineering, the 2020 Thar is just like any other car, with few weird quirks or compromises which would otherwise relegate it to an exclusively recreational vehicle. Can the 2020 Mahindra Thar be your only family car? Yes, with some caveats. Okay fine, here’s some weird compromises for you. For one, it’s shorter than 4 metres in length, which means you give up a bit of legroom and cargo area. In the 4-seater models in particular, there’s a thin sliver of space behind the rear seats for some vertically-stacked carry-ons, shopping bags, backpacks and the like. Anything heavier will need the seats folded. The Thar is currently only available as a 2-door, which means pushing the front passenger seat forward and squeezing behind it to get to the rear seats. For whatever reason, I was unable to find the lever to slide and fold the seat properly, which meant at one point I had to abandon the Thar and take a regular hatchback for a passenger pickup. Legroom at the back is okay, but in general, the seating is not comfortable for long trips. Is it better than older Thars? Emphatically.

The 2020 Mahindra Thar starts at Rs 9.8 lac and goes up to Rs 12.95 lac ex-showroom. The most recent SUVs I’ve driven in that price bracket are the Kia Sonet and the Renault Duster (in its final form). I have to say, the Thar has always tugged at the heartstrings, but with the idiosyncrasies all but removed, one could even make a case for it as a family car. If you’re Milind Gunaji, it always has been. 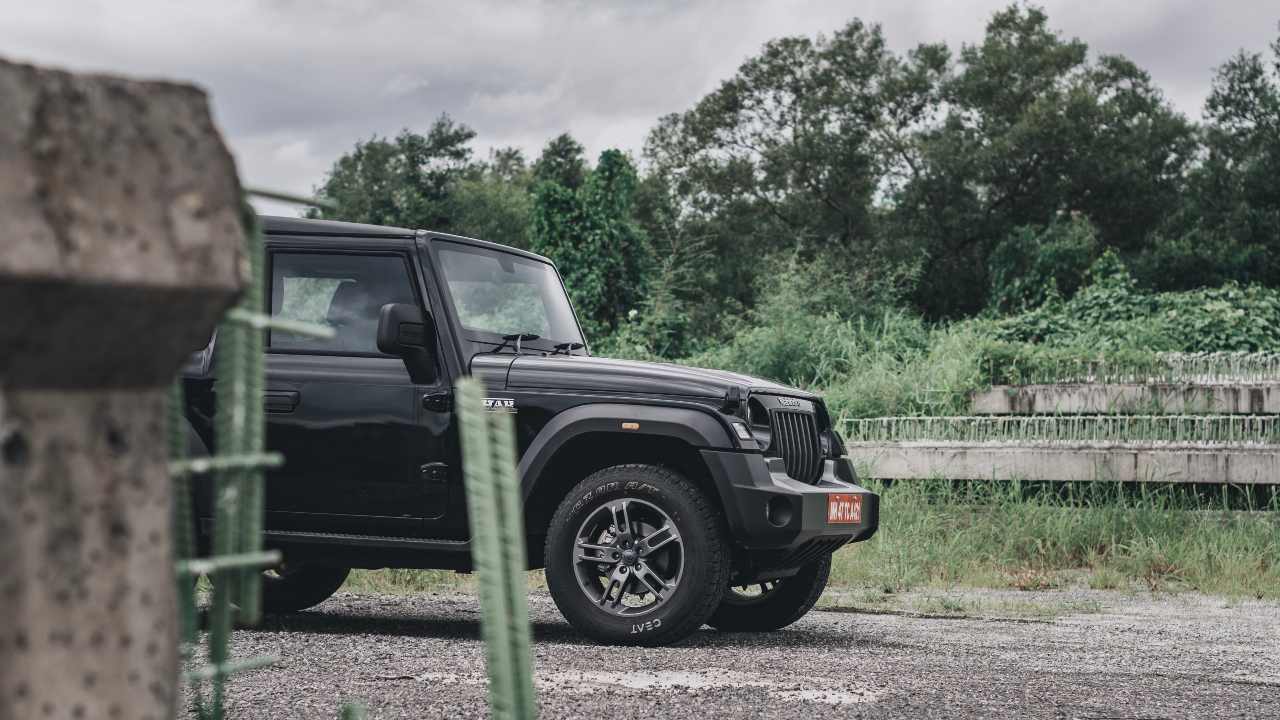 The 2020 Mahindra Thar deserves all the (massive) attention it gets