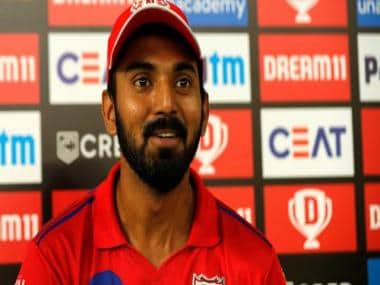 Abu Dhabi: Kings XI Punjab captain KL Rahul is hoping to “sneak” into the playoffs of the hotly-contested 13th Indian Premier League on the fourth position.

Having suffered a seven-wicket defeat to Rajasthan Royals on Friday, KXIP are currently placed fourth in the standings followed closely by RR and Kolkata Knight Riders with equal numbers of wins and points.

KXIP are scheduled to play Chennai Super Kings in their last league engagement on Sunday.

“We’ll try finishing on a winning note and hopefully sneak in on the number four position,” Rahul said at the post-match press conference after the game against RR.

While Rahul did not mean to take anything away from Rajasthan Royals’ win, he said dew played a big part in the outcome and that his bowlers would need to operate better with the wet ball.

“We did discuss before the game. It was an important game for us. If I would’ve won the toss, I would’ve chosen to bowl as well because we expected dew later.

“We’ve seen dew so many times in IPL as well as international cricket. Our bowlers have done really well this season and one game doesn’t change much. We must keep our heads high and come back stronger in the next game.

“One of the big reasons why the Royals could bat their way was the dew factor. Not taking anything away from their batsmen. They did put pressure on our bowlers and used the powerplay efficiently.

“Every batsman who came in started striking the ball and hitting boundaries. It worked for them and dew was a big reason behind that,” he added.

The KXIP skipper called the swashbuckling Chris Galyle an “inspirational” figure who keeps the dressing room positive. The Jamaican made a sparkling 99 in his latest outing.

“Gayle is a huge part of our dressing room. Not only because of his consistency but to have somebody like that is very inspiring. He keeps the dressing room positive and there’s a lot of fun happening when Chris is batting.

“No one will say he’s 41. He still looks like the Gayle when he first burst out in the IPL,” Rahul said.

“We have a strong batting unit and everyone is playing with responsibility. Earlier, we used to lose wickets in the powerplay. Now, every player is taking responsibility.

“We’re clicking with the bat and wins against MI and KXIP show the character of the team,” Tewatia said at the post-match presser.

He praised the recent performances of Ben Stokes and Sanju Samson – both shone in the game against KXIP and ensured Gayle’s blazing knock went in vain.

“Our top order is scoring runs and our middle order also looks stronger. Everyone is taking responsibility and that’s showing in the results. Our coach had also told us to show intent and deliver our 100 percent on the field.

“Ben Stokes is giving us good starts and Sanju Samson is also delivering strong performances with the bat,” he said.

Tewatia, who took a fine catch to send back Nicholas Pooran, lauded his side’s fielding.

“Fielding is all about confidence and we’ve been working hard in practice sessions too. We adjusted well according to the lights and put up a strong fielding performance.

“Ben Stokes is one of our best fielders and he took a brilliant catch to boost our morale. Talking about my catch, I was at the boundary line and I jumped at the right time to pull it off,” he said.